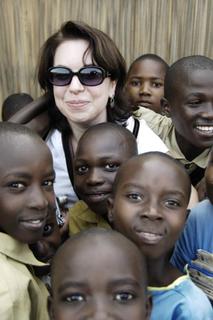 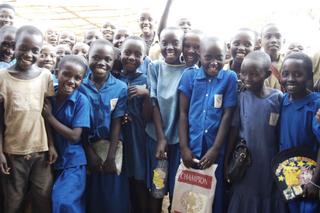 Photos © Peter Lien 2005
Maureen, Cari and Peter spent an emotional afternoon at AVVAIS (Association of Widows, Vulnerable, Affected and Infected by Aids). The following is in Maureen’s own words:

"Cari, Peter and I traveled to Nyamirambo today, a 30 minute journey to a town outside Kigali. Of course it would have taken only 15 minutes had there been more asphalt and fewer pot holes (seen Swiss cheese with fewer). We were headed to AVVAIS.

"The widows welcomed us with singing and dancing. It amazed me that women who had lost so much could sing with such joy. The Director, Chantal Kagemanyi gave us a quick tour of the new homes being built by teams of widows who lost their husbands during the genocide and those whose husbands are still in prison for committing acts of genocide. So much forgiveness in this country and so much to forgive.

"While Cari worked with the knitters inside, Peter and I made friends with the children outside. They almost broke my heart (maybe they did). No shoes, runny noses, torn clothing covered in dust . . .but show them their own image in the window of a digital camera . . .and you would think you just gave them the best present in the whole world. By the time school was out, word had spread that mazungus (foreigners) were in the neighborhood. I was soon surrounded. Everyone wanted their picture taken and to practice their English.

"Talk about a wake up call.. back home, in my NYC apartment, if I have no water and miss my morning hot shower, my day is ruined. These children and their mothers are hauling drinking water EVERYDAY without a thought for something as frivolous a hot shower. If we could help just one woman in Kigali earn a decent wage, how many of these children could benefit?"
--Maureen Spillane

Comments:
You may have arrived as "mazungas" but you left as friends! Regards, Golde.

Maureen - what a picture! You are so expressive and the children are beautiful - I'm very touched. Peter, these photos tell a great story. Love to all, Golde.

Maureen,
All of Special Markets loves this picture of you! Keep up the great work!