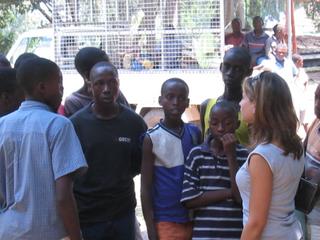 Delilah talking in Swahili with the boys at the orphanage. 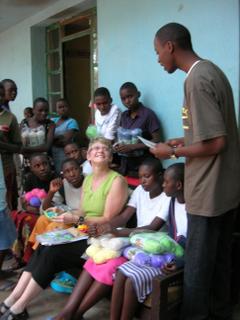 Cari giving yarn to the girls and teaching them to crochet flowers.

After a great night's sleep and breakfast on the upper deck of the Kivu Sun hotel, another Intercontinental property and an immaculate hotel right on Lake Kivu, the group had it's first real brainstorming session (more to follow). The location was tempting us to remain, but it was time to head to Rose Carr's orphanage, Imbabazi.

We found Rose with the children at the orphanage with her 100+ kids of all ages and both genders. The girls are renowned for their crocheting skills and Caron International's donation of 2 suitcases worth of yarn was quickly distributed to the girls who rewarded us with Cheshire cat grins. Cari then sat among the girls on a couch outside and taught 4 of the girls how to crochet a flower square. They caught on quickly and were soon replicating the squares using the yarn they'd been given. One of the girls was so fast Cari should enter her into the "world's fastest crocheter" contest.

Rose is now 93 but still controls nearly every activity at Imbabazi, from who gets the yarn to which colors to give each girl. She is very well known in the US due to her book, A Thousand Hills, and about half of the kids have a sponsor in the US. None of the kids are allowed to be adopted, as Rose could not be sure of their treatment once they leave her care.


Cari said that "Seeing these girls who have so little being so happy with just a couple skeins of yarn and a crochet hook is somehow so gratifying, sharing a skill that crosses the ocean, cultures and generations, forming a bond that is difficult to describe."


It was then off for more shopping in Gisenyi, then the 3+-hour ride to Kigali. Dinner at Republica, a local bar/restaurant where many Rwandan business people, government officials and foreigners frequent, was very good. We met the owner and his sister, who runs the gift shop below the restaurant. This shop had the best presentation of merchandise and displays of all the shops we've visited. Of course Kate bought more stuff.

Comments:
I am continually struck at the diversity of experiences you are having from fast runners, to the university, to associations and co-ops, to ministries, to new partners --and of course shopping. I can't wait to hear the ideas you are shaping, not just for Rwanda, but how what you've learned can possibly streamline Bpeace work in Afghanistan, and help shape our new mentoring entry in Iraq. Come home rested because I can't wait to hear.