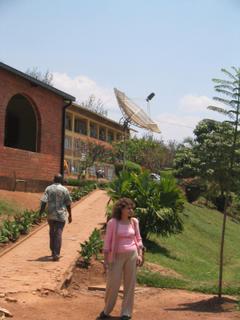 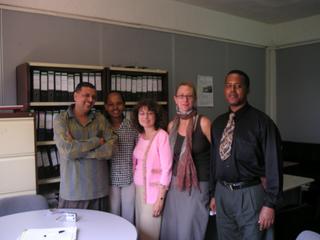 Our day began as always with a breakfast planning session washed down with copious pots of coffee and African tea for our sleep deprived team. The tea is similar to chai and what many Rwandans drink. Both the coffee and tea are grown here in Rwanda. Have we already whined about the coffee situation? Much of the team is in full withdrawal from decent coffee as we continue to search for it here. But as we have shared earlier the search is fruitless as Rwandans export most of their wonderful product. Some of us gazed with longing at the coffee trees in Butare, many of which were in full bloom during our trip.

It is hard for the team to watch the coverage of New Orleans from so far away. Or perhaps it is easier? We, like you, remain dazed at the impact of the hurricane and the terrible downward spiral the region appears to be in. The third world has washed onto the Gulf shoreline. Indeed it appears worse. We listen to Kofi Annan call for international assistance for the U.S. from Africa and it is a surreal experience. We send our prayers and thoughts.

But back to work for us.

Anne and Kate go to school!
KIST is the Kigali Institute of Science and its campus is around the corner from the hotel. Founded in 1997 it is on the sprawling grounds of a former military center. Anne and Kate decided to walk and soon became lost on the grounds searching for their first appointment. They ended up on a self tour of the entire campus, entering building after building with Anne peering into classrooms and labs. The students were a bit stunned to see these two crazy ladies.

Comments:
Thanks for the comic relief - I can picture the looks on thses students faces! Love to all, Golde.

Way to go Anne and Kate, You are pathfinders. I think KIST can play a huge role in terms of developing Business Programs,provide training for local business people and provide the technical support to the existing Business.Debra and I are glad that you are able to do so much in short time. Stay well.

From Bonni:
I do not seem to be able to log on to the blog post comments, but I had something that I wanted to share.

I think there is a connection between the natural disaster and tragic aftermath in the New Orleans and the surrounding areas and the important mission that you are all on. Of course there is universality in the basic needs we all have (clean water, shelter, medical care, safety), that in America we often take for granted. Also, there is the reliance on each other that we have to survive.

Also, I was vividly reminded this morning that underlying all genocide is hatred and ignorance.

While walking home chatting with a neighbor, she began to discuss her strong belief that the chaos and violence in New Orleans was attributable to race (among other disturbing racist sentiments). She clearly blamed the victims for the dire conditions they were enduring, including the preceding poverty.

I reminded her that my husband, and his father, were African-American... and she later called to apologize. She attributed her callousness to overload of media images from the news coverage of the tragedy. She now said she would also likely do things like loot for survival... but she would not loot a jewelry store.

I shared with her that Grandma Gina told us that it sometimes took a diamond ring for one night's shelter in hiding from the nazi's in someone's farmhouse. I also told her that people are without access to ATM's or credit cards, and they may not have had much money to begin with, and they are trying to survive. I went on to discuss Alex's father's struggles with segregation in DC as a child, and she was surprised that segregation had touched just one generation before us.

Although I am sure she is intrenched in her beliefs, it seemed credible when she said that I had a perspective that she hadn't considered before. Her ignorance seemed real, and sad, and scary... and also reminiscent of the unquestioning hatred underlying man-made attrocities.

Excuse Kate but I hope that you will never again complain about my lack of sense of direction!!!
:-)

Bonni - I'm proud of you and your Mom - she taught you well and you learned your lessons well. Grandma would be happy that you see the connection between all peoples' suffering. The team is doing an extraordinary amount of good - a clear message is being sent that there are people out there - different than themselves, that can lend a helping hand, expertise and many other things that are needed. Love to all, Golde.

Thinking about my sister Anne roaming around that school lost, makes me laugh out loud!
Keep up the great work and hope to see you soon